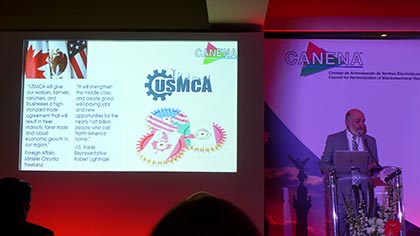 Amid transition from NAFTA to USMCA, CANENA looks to the future

The 27th Annual General Meeting (AGM) of the Council for Harmonization of Electrotechnical Standards of the Nations in the Americas (CANENA) held February 27-28 in Mexico City, Mexico, focused on the emerging challenges and opportunities facing CANENA Members regarding the U.S.-Mexico-Canada Trade Agreement (USCMA).

CANENA President Julian Yarza discussed changes in Standards development in a time of technological change that is reshaping the functioning of national economies as well the importance of USMCA for North American trading partners to cooperate on electrotechnical safety Standards for electrical products and systems. Yarza highlighted that USMCA offers more specific guidance on identifying and applying international Standards, guides, or recommendations than its predecessor, the current

North American Free Trade Agreement (NAFTA), by requiring each party to apply the World Trade Organization Technical Barriers to Trade Committee decision on international Standards. The significance of this reference is that Standards development organizations domiciled in the U.S., Mexico, or Canada and meeting the WTO criteria are considered international Standards developers. This new approach is extended to US-Mexico-Canada conformity assessment systems. 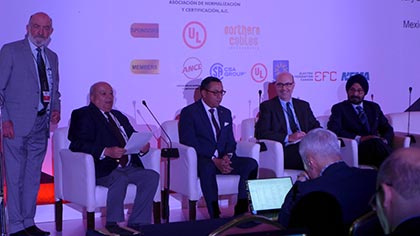 The USMCA theme resonated throughout the AGM, with speakers from all three countries commenting on commitments made in the new agreement to enhance transparency and increase collaboration to prevent trade barriers while promoting safety, confidence, and competitiveness.

Breakout sessions confirmed the critical role of Standardization as the vehicle to bring certainty, safety, efficiency, and bolster trade facilitation. Participants agreed to streamline the Standards harmonization process and produce case studies on the value of national Standards harmonization through CANENA as well as to push for essential interactions between stakeholders and regulators.

The transition of Mexico’s government was another prominent contextual element for the meeting. Fewer than 100 days after President Andrés Manuel López Obrador’s inauguration on December 1, 2018, day two of the CANENA meeting featured a panel of Mexican regulatory officials charged with overseeing the electrical industry to explain their objectives and challenges. 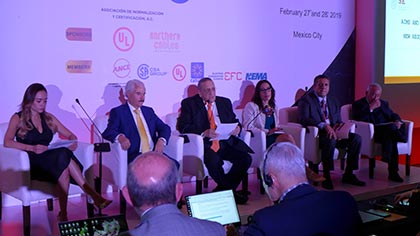 Speakers included the General Directorate for Standards (Dirección General de Normas or DGN) of the Economy Secretariat, the Energy Secretariat, the utility regulator (Comisión Reguladora de Energía or CRE), the Institute for Telecommunications, and the National Commission on Energy Efficiency (CONUEE). Each speaker emphasized the agency’s authority and plans to continue to set mandatory federal Standards.

Cooperation with the International Electrotechnical Commission

CANENA and the International Electrotechnical Commission (IEC) believe that technical alignment is a key pillar of global trade. Since September 2000, CANENA has cooperated with the IEC in several areas to strengthen multilateral Standardization cooperation between CANENA and regions outside of North America. As part of that cooperation, CANENA is asked to convey the results of its Standards harmonization activities to the IEC. The 2019 CANENA Update to IEC can be found here.

The CANENA Council decided to hold the AGM on a bi-annual basis. The next conference is scheduled for February 24-25, 2021, in Mexico City. There will be an online CANENA Council meeting on February 26, 2020. A detailed agenda will be sent one month before the meeting. For more information and last year’s minutes, visit our website.

With many proposals to harmonize Standards under the CANENA process, the Executive Committee agreed to develop the CANENA project initiation request – a transparent reporting system tracking progress on the proposals. The report, found here shows the current status of each project initiation request and provides an executive summary of completed and in-progress Standard tasks.